Worming your dog safely during pregnancy and lactation

Worming your dog – is there a natural alternative? 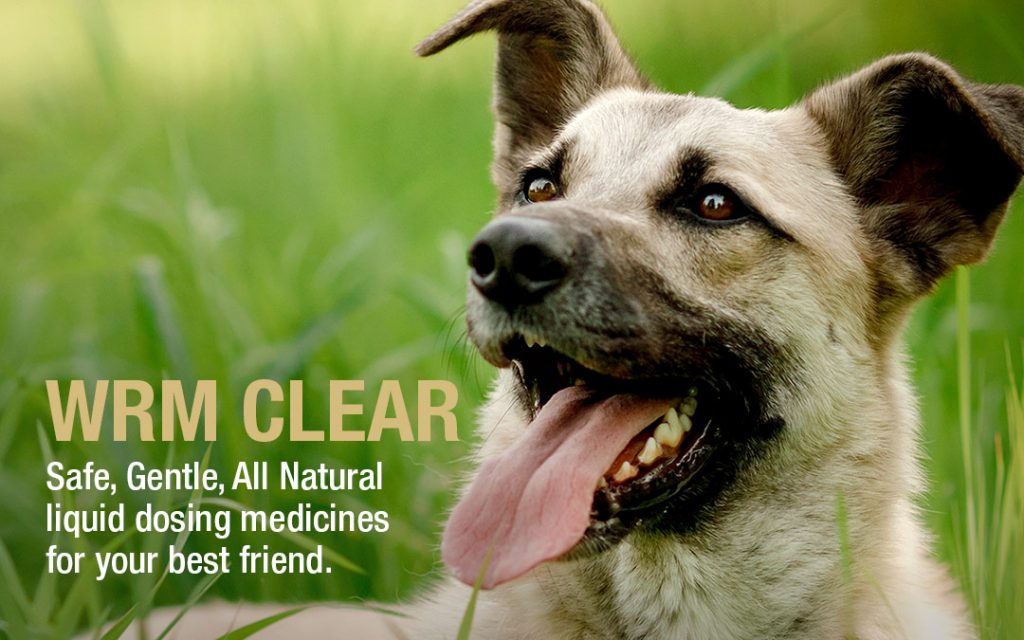 Parasites worm their way into most dogs’ lives at one time or another and every responsible pooch parent has their dog on a regular deworming program to help keep them at bay. Just as worms can pose a danger to your cat, common parasites live in your dog’s intestinal tract and can make him or her very sick if left untreated.

Usually there are no obvious symptoms that your dog has worms, so out of sight should not mean out of mind as not only do they pose a danger to your dog, some worms can also infect humans and all of them can infect other dogs.

Here at HomeoPet, our mission is to provide a more natural way to help keep your pets healthy and although there are a range of chemical-based products available on the market today to treat worms, a drug free approach is possible, thanks to WRM Clear.

WRM Clear is easy to administer, is a safe and gentle natural chemical free product that works with the body’s own immune system.

But before we look at how WRM Clear can potentially benefit a dog with worms, we should have a basic understanding of the signs and consequences of worm infestation..

Does your dog have worms?

While the most obvious symptom that your dog is affected would be visible worms in his or her stool, this is not always the case. Other symptoms that your dog may display include rubbing his bottom on the ground, weight loss and being visibly underweight, worms in faeces, vomit, or around the anus, excessive hunger, flaky skin and a dull coat, diarrhoea or vomiting.

If worms are left untreated for a long time, the effects can potentially be fatal – particularly for puppies, so you should always take veterinary advice before addressing the issue.

Types of worms in dogs 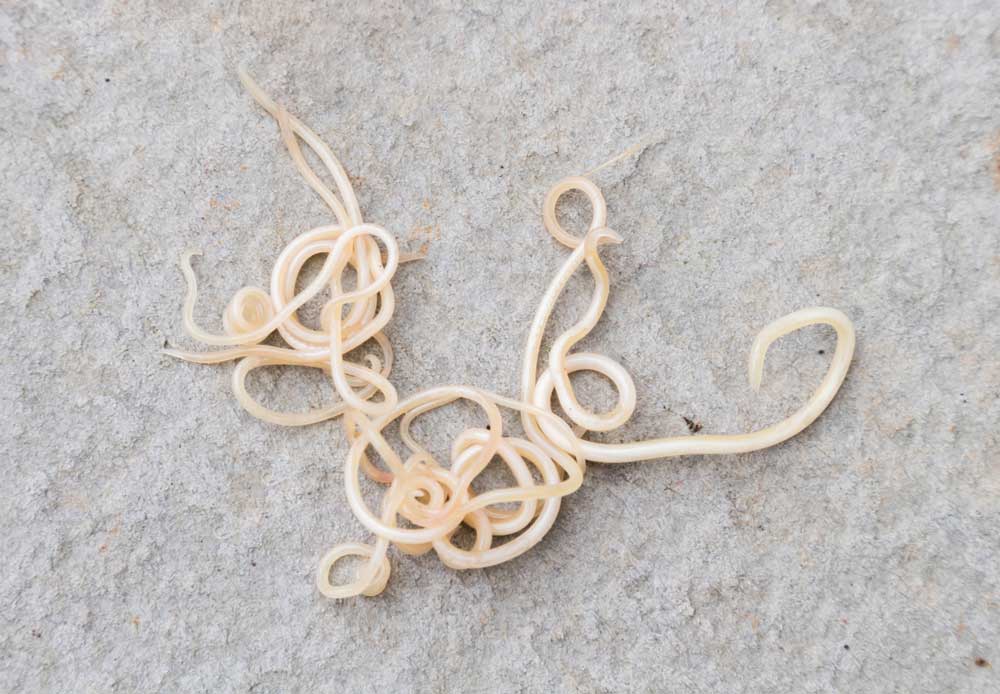 Canine roundworms look like strands of spaghetti and can reach up to 20cm in length! They live on partially digested food in the dog’s bowel, and adults release microscopic eggs that are passed out into the environment in the dog’s faeces. If a dog sniffs, licks, or plays in an area containing contaminated faeces the eggs can be picked up on his muzzle and paws and then ingested. Humans can also accidentally ingest roundworm eggs and become infected, so maintaining a clean environment is paramount in helping to prevent roundworm infestation for both you and your dog. 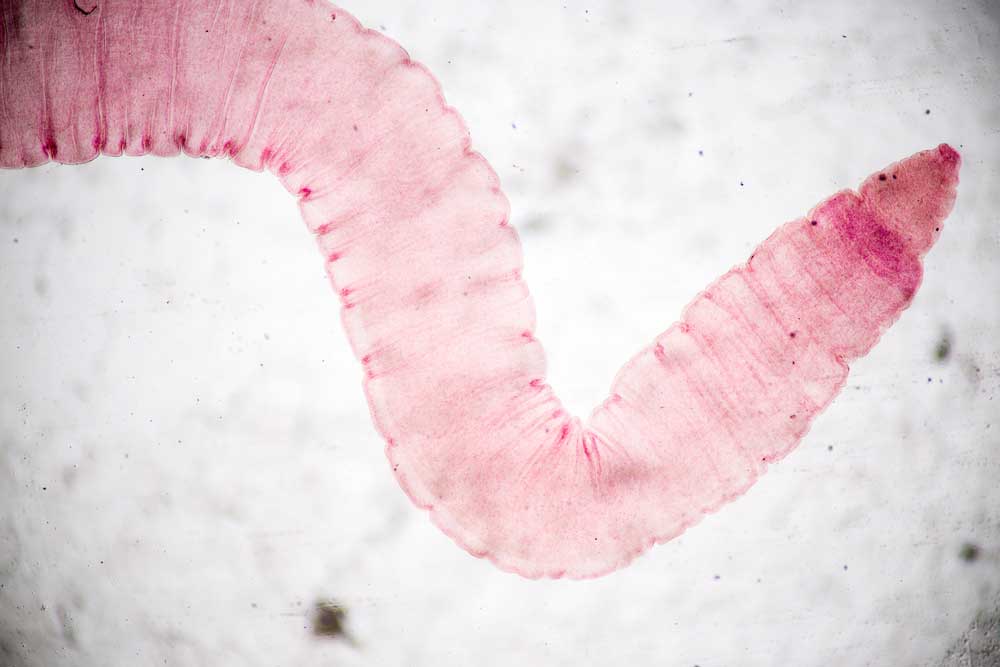 Tapeworms look like small pieces of rice and can be found in the faeces or around the tail and rear area. To complete their life-cycle, all tapeworms require an intermediate host to first eat the eggs from the environment and then your dog becomes infected by eating the intermediate host.

Fleas act as intermediate hosts for tapeworms, so your dog is easily infected by ingesting fleas as he grooms himself. Humans can also become infected through accidental ingestion of infected fleas, so it’s important to maintain a regular flea and worm treatment regime to help keep you and your dog safe and healthy.

Whipworms look like tiny pieces of thread, with one end enlarged, and live and lay eggs in your dog’s intestine which are then passed out in faeces, though they cannot be commonly seen with the unaided eye.  They then spend about two weeks on ground developing into infective embryos before being ingested by your dog once again and so continuing on their lifecycle. Whipworms are able to live in an environment anywhere from a few months to a few years and their eggs can be present in soil, food, and water, as well as in faeces and animal flesh, consequently animals are generally infected due to poor hygiene. 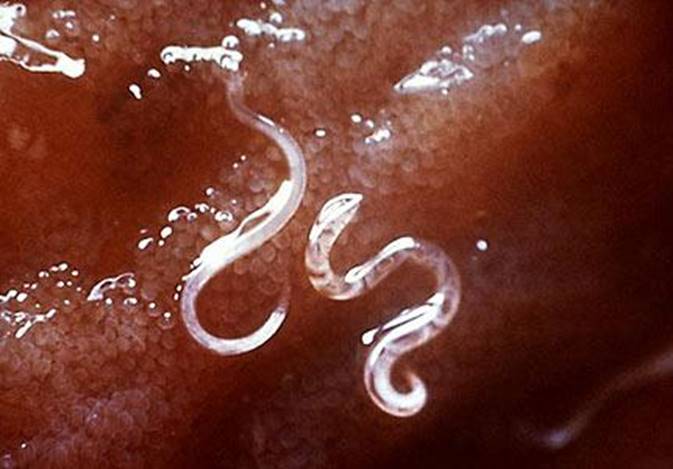 Similar to Whipworms, the very small size of Hookworms makes them very difficult to see with the unaided eye, but 500 worms can remove half 2Kg /4lbs of a puppy’s blood volume in a day, so they can inflict enormous damage! Hookworms can infect pups via milk and all dogs may be infected by ingesting eggs from their environment, from eating an infected intermediate host or by the larvae in the environment burrowing through the dog’s skin, which will cause a lot of itching. Hookworm larvae can also be picked up by humans if walking barefoot on affected sand or soil.

Treating your dog for worms, naturally

HomeoPet WRM Clear may aid in the recovery from worm infestation and is ideal for the removal of worms where a drug-free approach is favoured. It is also extremely useful for debilitation caused by severe worm infestation where concurrent use with a conventional wormer has been recommended by your veterinarian.

WRM Clear can also help those animals with an intolerance of the side effects from conventional drugs such as report vomiting, diarrhoea, skin rashes or any of the other myriad of side effect symptoms which can occur as a result of such sensitivities. . 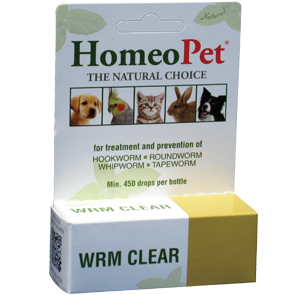 Worm types that are covered by WRM Clear include:

It’s important to know that HomeoPet WRM Clear does not kill the worms as there are no toxic or harsh chemicals present. Instead, it gently creates an environment in the body that the worms can no longer tolerate, thereby allowing the worms to flush themselves harmlessly from the body. Consequently, proper cleaning of the environment is crucial.

WRM Clear formulated as a support to your dog’s own natural healing and recovery system, taking up to 2 weeks for the product to reach its maximum potential. During this time, you may see live worms in the stool, which is a good indication. You may continue to see worms coming out for up to 4 weeks after the last dose because it takes that long for worm eggs to hatch. The effect of WRM Clear may remain in the body for up to 2 months after the last dose, thus inhibiting re-infestation within that time period in spite of contact with worms.

When you might need to use a drug-based dewormer?

It’s important to note that in debilitated animals, or those with large worm burdens where the body is unable to raise an immune response, WRM Clear should be combined with conventional or herbal wormers. If in doubt consult your veterinarian.

If a drug-based approach is required for your dog, it’s reassuring to know that WRM Clear makes an excellent complement. In such situations, treatment with WRM Clear can be started before the administration of conventional wormers. This approach can help to avoid the serious consequences of a sudden kill off large numbers of worms in a heavy infestation, which can lead to obstruction and other serious consequences in your dog.

Additionally, some of the ingredients in WRM Clear are listed in the HPUS to help detoxify chemicals in the body and so may help pet patients who are sensitive to and yet need conventional wormers. Similarly, conventional wormers can be needed in cases where there is a severe worm burden, particularly in poorly nourished dogs or puppies and especially in those who may also have compromised immune systems, such as those with infections on top of a worm burden. In such cases, WRM Clear may not be fully effective in removing the worm burden as the dog or puppy is incapable of mounting a response to throw out the worms, but it may help the sickly dog or puppy deal with the chemicals in the conventional wormer.

In non-responsive cases or in those obviously not well, always consult your veterinarian as dogs can die of severe worm burdens, but even then, it is possible to use Wrm Clear in conjunction with the conventional medications.